I googled but couldn't find any solutions even now. If anyone knows how to resolve this, I'm all ears.

Disclaimer:
The information in this site is the result of my researches in the Internet and of my experiences. It is solely used for my purpose and may not be suitable for others. I will NOT take any responsibility of end result after following these steps (although I will try to help if you send me your questions/problems).

So for now, I'm going to install it with full disk encryption on UFS instead. After many trial and errors, I found steps that worked on my system (thanks to BSD Now). I'll just list commands below just in case the site becomes unavailable in the future (it happens!).

Follow the installation until the partition menu. Choose shell to manually configure the disk encryption before the OS is installed.

To view a list of disk devices, run: # sysctl kern.disks

Exit out and follow the rest of installation. After rebooting, it should prompt for passphrase.

However, on my system there was a bit of gotcha after the reboot: 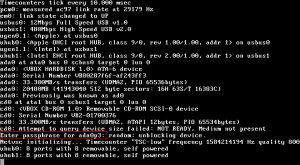