While I was researching on suspend/resume capability for FreeBSD on my notebook, I came across with the zzz command. Guess, what it does! It puts the system in the sleep mode (zzz(8)).

In the FreeBSD wiki page for Laptops, it asks to boot up a laptop with a FreeBSD CURRENT image and gathers some hardware info with the following commands: # mount -u -o rw / # dmesg > /dmesg.out # pciconf -lv > /pciconf.out # devinfo -v > /devinfo.out # acpidump -dt > /acpidump.out # mount -u -o ro / ; sync # zzz

Maybe, I'll give those commands a try next time when I go to a store...

One of annoying things with notebook is the beep when you hit a wrong key. This is a way to disable system beep/bell.

Here is another way that worked for my HP Pavilion dm3-1130us notebook. Try this on a console and see if it disables a beep:# kbdcontrol -b quiet.off

I searched around for a solution but couldn't find any so I gave up on FreeBSD.

Years after, meaning recently, I gave FreeBSD 11-RELEASE a new shot, hoping that zfs boot up problem was resolved by now. *BAM* I got the same error after installing it with zfs. For desperation, I searched again and again. Tried building partition table manually, updating bootcode after the installation, etc... But nothing worked... I even tried TrueOS (FreeBSD with zfs and more) but got the same problem after the installation. Sob...

But finally, I found a solution (sort of)!!!

Here is what I tried. I don't think the installation medium makes difference but I used a USB boot image.

Step 1) Download the FreeBSD memstick image. Find the latest release version (as of this writing, it's 11.0) from the freebsd.org ftp site.

Step 2) dd the memstick image to a USB memory stick. The USB device name could be different depending on which OS you are using, but for FreeBSD, I read somewhere that said you need to use FreeBSD to make a bootable USB memory stick. So, I installed FreeBSD 11-RELEASE with UFS and ran the command: # dd if=FreeBSD-11.0-RELEASE-amd64-memstick.img of=/dev/da0 bs=1M conv=sync

Step 4) Install the system but at the partitioning, choose Auto ZFS: 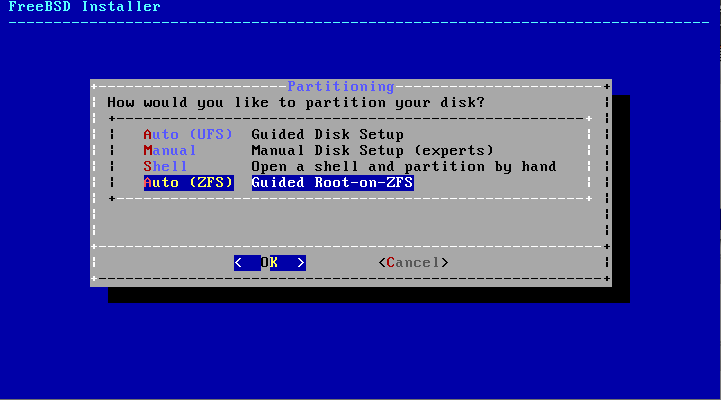 Here is the zfs configuration: 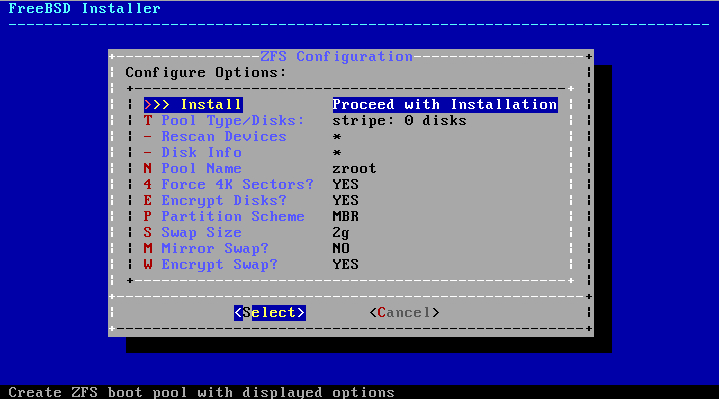 Step 5) Go through the rest of the installation until it asks you for the last manual configuration. Select Yes to update gptzfsboot and bootdcode: 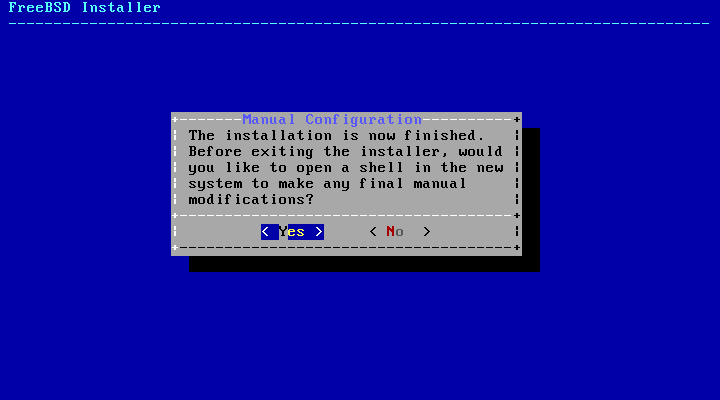 Step 6) Get the updated gptzfsboot_hp from the FreeBSD Bugzilla. The url is listed in Allan Jude at Comment 29. If you are not configured its networking, enable dhcp client: # dhclient re0

Step 7) Rename gptzfsboot_hp to gptzfsboot and move it to /boot.

Step 8) Update the bootcode. Make sure you are using /boot/pmbr for the GPT partition type: # gpart bootcode -b /boot/pmbr -p /boot/gptzfsboot -i 1 ada0

Step 9) Make sure the partition scheme and it's for the ada0 disk. Occasionally, its disk ID is changed to something like diskid/DISK-.... If this happens, use that disk name/id instead of ada0 at the Step 8.

I have no idea why it's not working so I followed the handbook, 18.5. USB Storage Devices (and I also made a regular user mountable).

Create a directory which a regular use can mount to: # mkdir /mnt/ubyt3m3 # chown ubyt3m3:ubyt3m3 /mnt/ubyt3m3

I got Invalid argument instead of Operation not permitted but this did not resolve my original issue. Hmm... does this mean FreeBSD does not support mounting ext4 filesystem? A bit of googling found that FreeBSD supports ext2/ext3 with ext2fs type but not ext4. However, I found that FreeBSD base system comes with the fuse implementation. Indeed, there is sysutils/fusefs-ext4fuse. Let's try installing this. # cd /usr/ports/sysutils/fusefs-ext4fuse # make install clean

So, it's still not working, huh? A further googling led me to some hints. It looks like there is a kernel module for fuse, fuse.ko, and this needs to be loaded to the kernel. # kldload fuse.ko

Disclaimer:
The information in this site is the result of my researches in the Internet and of my experiences. It is solely used for my purpose and may not be suitable for others. I will NOT take any responsibility of end result after following these steps (although I will try to help if you send me your questions/problems).